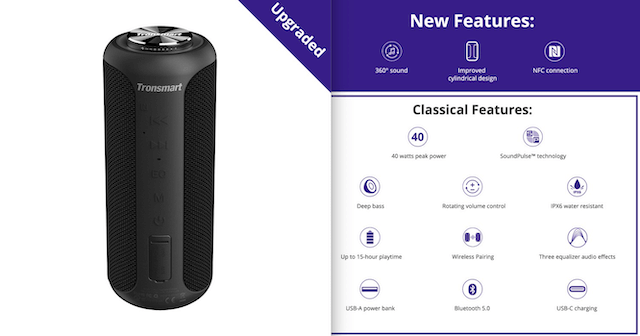 Tronsmart has released its latest edition of the Bluetooth speaker which is known as “The element”. This new edition, T6 Plus Upgraded Edition is really the next generation of T6 Plus model that has put Tronsmart on the map. Its name ‘the element’ has been chosen due to the capacity and rugged reliability of the speaker which stands up to its elements. With durability and water resistance, this Tronsmart T6 Plus Upgraded Edition Bluetooth Speaker is meant to be seen outdoors. It has even 50% more wattage than its previous generation, this difference is really noticeable. Along with this, there are a lot of features of these Bluetooth speakers which really makes it worth the price.

This Tronsmart speaker also has a rating of IPX6 water-resistant. This rating means that there is also protection from any type of sabotage by dust. Even this is really something for the adventurous individuals as they can take it anywhere they want without any concern. A lot of people have this concern of dust but as it has got the rating so this will definitely be not an issue. Definitely, you want more than durability. The main point is sound and this Tronsmart T6 Plus Upgraded Edition has the sound pulse technology. There is one interesting feature of this Bluetooth speaker which is its ability to pair two T6 Plus speakers together so as to get the double power. It”s great speakers make it stand out from other speakers.

T6 Plus Upgraded Edition has the cylindrical shape just as the previous generation of T6. This will really make it easy for you to toss in the water bottle holder on the side of hiking bags or backpacks. At the top of the Bluetooth speakers is the volume wheel which you can rotate this volume wheel clockwise for increasing the volume. The other controls are located at the front face of this cylinder where the true wireless function button is there which will allow this speaker for pairing up. Now people have also become really comfortable with this cylindrical shape. The dimension of the Tronsmart T6 Plus Upgraded Edition is 8.27 x 3.31 x 3.31 inches. This shape really makes it easy for the people to carry it anywhere or you can set it forward. Its weight is only 1.6 pounds which is made of aluminum and ABS, which makes it very easy for you to carry.

The audio quality is based on various factors and it is really important. The audio quality and the file type are just as important as the Bluetooth speaker itself. So if you are playing high fidelity audio, the quality of the sound will depend on the input type. The T6 Plus Upgraded Edition model of Tronsmart supports the input from Micro SD/TF, Bluetooth, USB, and Aux-in. The Aux-in port is for 3.5mm an audio cable that is standard for all the speakers. A lot of speakers have sound defects like harmonic distortion in some sound ranges. The sound plus technology makes the Tronsmart Bluetooth speaker for eliminating the harsh voice for countering such defects. There will be quality vocals and better sound quality. This technology will enable the speaker to make a difference in the sound separately. When the sounds are processed separately, then there can be the prevention of the clashing of the bass settings and high pitch vocals.

Tronsmart T6 Plus Upgraded Edition Bluetooth speakers are very easy to use and straightforward. You just have to connect this with the Bluetooth and you are ready to play the music you want. There are also voice assistant functions in this speaker which can be activated by holding the controller for continuous 3 seconds. This feature can be paired with Google voice assistant or Siri and then the built-in mic can be utilized.

The Tronsmart T6 Plus Upgraded Edition can be used on any occasion you want.

Why ETF trading is so hard for the rookies

GDPR and the Legal Sector

How has vehicle technology improved over time?