Several companies would cater you with a wide range of entertainment software. However, you should look forward to the one offering you with one stop shop for your entertainment needs. They should be providing you with the best in music, movies, radio, television and more.

It would be pertinent to mention here that technology used by Audials has received several awards from the international specialized press. It has been voted as ‘Software of the Year’ on several occasions. The software has been highly popular with the audience. You could log on to the official website of the company to seek the best options inclusive of Audials One, Tunebite, Audials, Audials Radiotracker, Audials Music Rocket and Audials Moviebox. 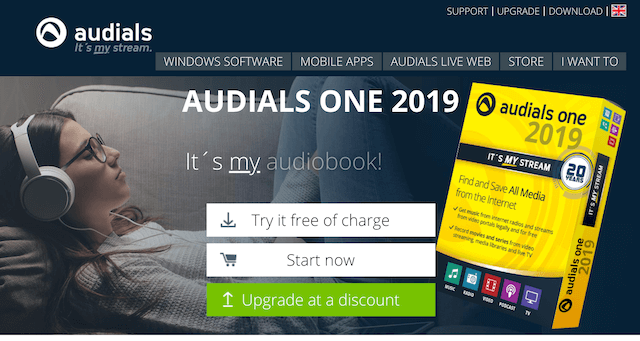 You could lay your hands on Audials One available on subscription basis on the website. The software used by Audials has been specifically optimized for Microsoft Windows along with the Apple Mac operating systems. It would also be made available as application for smart phones along with tablets running iOS and Android.

With wide experience of thirteen years in the industry, Audials One offers state of the art and best in business streaming recorder that would offer quick and efficient music as no other. It has been deemed the best for storing movies and series online along with listening to high quality audio while on the move.

Launch of latest Audials One 2019

The Audials software family has ruled the past 20 years in the entertainment industry. The latest in the lineup – Audials One 2019, look forward to adding several improvements along with unique innovations for the benefit of the user.

The newly developed style functions make the Audials One 2019 the best option for entertainment. The user could describe it in their musical taste. They would be able to lay their hands on vast amounts of suitable music from various sources in a legal manner. It would come equipped with the quickest streaming recorders available online. It could record individual tracks and could even play two at the same time. It could play the tracks at five times the speed of popular music streaming services such as Spotify.

The new Audials One 2019 software could browse Spotify as additional source of music. It could also deliver the recording in high quality and shortest duration. Audials One 2019 has been the only available software offering such a world of innovation.

Apart from music, the Audials One 2019 would also be providing you with a platform for recording movies. It would be making use of batch recorder along with automatic episode recording function to help you save length of series for the season. It would video stream series from popular services such as Netflix, Amazon and more.

Improvements made by the software

The users would benefit largely from several improvements made to new available software. It would specifically hold true in the arena of internet television. The latest Audials One 2019 software has been designed to offer 130 live TV streams worldwide. It could be viewed and recorded using the latest designed and convenient player.

Enhanced quality for the users

It would be pertinent to mention here that speed, quality and user-friendliness has been the major improvements in the music arena. Quality in terms of music recording has improved significantly. It would enhance further as well. You would be able to download music from YouTube, which has been optimized, as Spotify would include in music search function and enhanced wish list function. Thanks to the latest styles, Audials would offer you with music collector generator.

Audials One 2019 offer you with option to Record and Save all major streaming services. The software would provide you with highest quality recordings and downloads. You would be able to save maximum music in a quick and efficient manner. It would help you find and save maximum music by searching through all major music services. All songs would be saved instantaneously. The software would determine the best version automatically. It would offer wide range of options pertaining to music selection and discovery.

In case, you were looking forward to having personalization and music tastes or styles, you could make the most of the option provided by Audials One 2019. It also caters you with an option to get music in the background. The music bot would help you get your music collection automatically. The latest technology enables you to create audio and video files in all kinds of major formats.

Top Five Apps You Need When You Travel

Here’s why you shouldn’t care about being safe online

More than Your Toaster: The Internet of Things for SMEs

How to Build Brand Loyalty in a Competitive Industry