Entertainment on computers is one vital need of having a computer, and a free media player like the 5KPlayer can add more fun to the joy. Just being a video or audio file is no cooler in the present tech scenario; instead the players now have to be more than that. 5KPlayer comes packed with lots of features – apart from being a free media player and having AirPlay feature enabled right out of the website, it can play 5K videos at ease. With Apple releasing their 5K computer, there will soon be a time when everyone would need their computers to play 5K videos so why not prepare beforehand? 5KPlayer is as good as a default player on your computer as well, and it supports both Windows and Mac platforms.

As most of you already know, Windows is getting rid of their media player as you know it, from the next iteration – Windows 10. Of course there are plenty many alternatives you could switch to, but are they compatible with larger 4k or 5k videos? Most probably not, as only a very few media players can actually and efficiently play 5K videos on PC based platforms. 5KPlayer player could act as your default media player on Windows 10 ecosystem, or any previous version that you may be using. The DVD playback features are as impressive as the 5K playing capability as well as the playback and region based settings are adjusted automatically to suit your computer settings. If you are on Mac, then you might want to have the AirPlay feature in-built and 5KPlayer just has the thing. And the best part is – you no more have to dig websites or third party programs to download an online video you like. Instead, download it using 5KPlayer’s very interface. 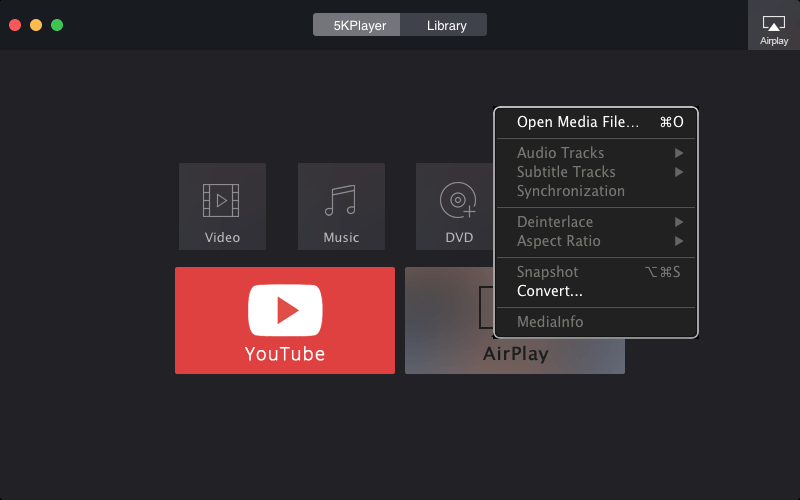 Even though DVDs are little backdated, but they aren’t out of order yet. Many of us still have a bunch of DVDs we can’t let go because we bought them with great enthusiasm or they are gifts from some beloved ones. Whatever is the case, if you plan on ripping the contents and storing on your computer, you could try this other awesome software we have tested, called WinX DVD Ripper Platinum. This software runs on Windows computers and could rip your DVD videos to any popular formats. So, you can AirPlay DVD movies to any big screen.

Enjoy the Awesomeness of AirPlay

5KPlayer comes with built in support for AirPlay to play and stream media files. This app syncs well with any Apple device like the iPhone, iPad or the iPods. However, the Apple devices only support few formats while you may have a bunch of files in formats that iTunes or Apple Quick Time don’t support. To make these files acceptable to Apple software, you need to use a converter and we suggest using WinX HD Video Converter Deluxe. Your existing video converter might be doing your job well, but we still want you to take a look at this software, already having support for the upcoming Windows 10. You shall have full control over any video format and resolution and definitely, in favor of using AirPlay feature to its fullest potential.

Download all the software we have mentioned above following the links below:

The Era of Technology Could Be the Best Chance for Success

5 Future Technologies That Are Currently Being Developed