Disk partition software is used to create, shrink, expand, split,merge and delete partitions on user’s hard drive or other storage devices. In fact, windows users could use the Microsoft Windows built-in disk management tool to do all the functions above. However, as there are some limitations in that built-in tool, it takes more time and energy to finish all the steps. There are plenty of partition tools, but not all of them are safe and easy to use. Users should keep sharp eyes on them. Here we would like to show the completely free disk partition program – AOMEI Partition Assistant Standard Edition that even the green hands will love. Whether you are shrinking the partition to make room for a operating system dual-boot setup or merging two nonadjacent partitions without deleting your value data, AOMEI Partition Assistant Standard Edition could sure come in handy. 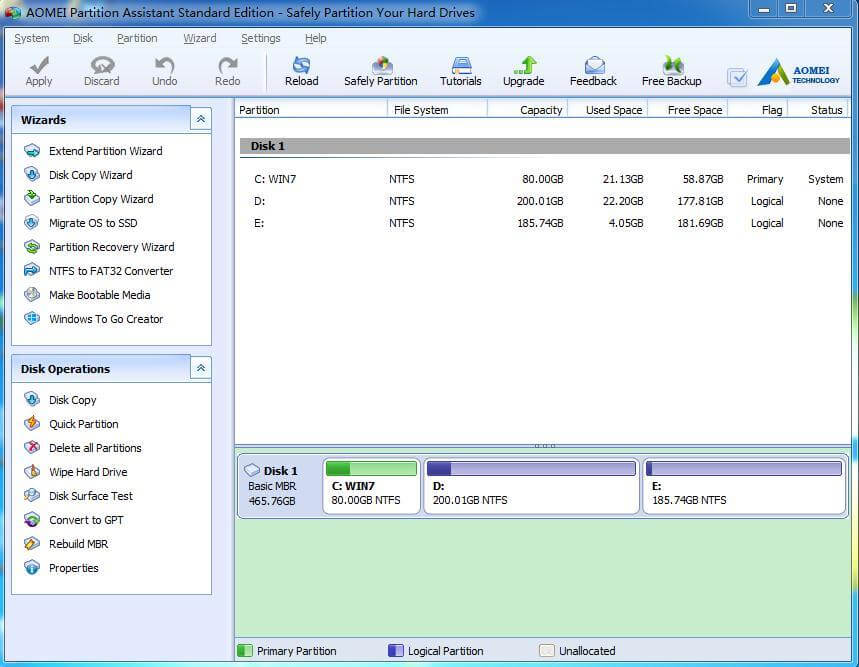 AOMEI Partition Assistant SE is famous for its powerful disk functions yet easy-to-use performance. The simple interface with scientific layout make novice using it smoothly. It includes more partition management tools than most similar programs, even ones you might pay for. Not only does the free AOMEI Partition Assistant support the regular features like resizing, splitting, deleting, moving, merging and copying partitions, but it also can run a fluent surface test, align partitions, change the drive letters as well as the volume labels.

Migrate OS to SSD/HHD: users can move the operating system partitions to another storage device safely and quickly without reinstalling anything.

NTFS to FAT32 Converter: the converter can change the file system to and from NTFS and FAT32

Wipe Disk or Wipe Partition: hard disks and partitions can be wiped clean to erase all the data to ensure the security of users’ private and sensitive data.

Command Line Partitioning: it provides partassist.exe utility for users to partition hard drive from command prompt like Diskpart but more powerful. The partassist.exe command line utility enables you to perform most of the disk partition operations that are supported by the AOMEI Partition Assistant graphical user interface (GUI).

AOMEI Partition Assistant Standard Edition supports not only traditional hard disk drive (HDD), solid-state drives (SSD) and SSHD but also can be used virtual disk partition in VMware, Virtual Box and Virtual PC etc. All in all, it enables you to realize more safely partitioning operations as you expected.

Drone Simulators to Help You Train When It Rains

8 Aspects to Take into Account When Choosing Cardboard Packaging